February 16th marked the 30th anniversary of Keith Haring’s death. After all this time, there is one thing to us that’s clear: Haring is still as popular as ever.

Haring was a true original within the art world. His work grew to popularity from his spontaneous drawings in New York City subways, chalk outlines of figures, dogs, and other stylized images on blank black advertising-space backgrounds. Creating an exhilarating combination of pop art and graffiti, the artist took inspiration from the underground cultures he immersed himself in, never forgetting to also give back. His later work often addressed political and societal themes, especially homosexuality and AIDS through his own iconography. Much of his work includes sexual allusions that turned into social activism. He achieved this by using sexual images to advocate for safe sex and AIDS awareness. The political and social messages in his work were often in contrast to government policy and action. He merged the worlds of politics and art to hone a distinct voice that spread like light in darker times.

Haring created works of art across many mediums that could be appreciated without a comprehensive understanding of art history and theory. In many ways the accessibility of Haring’s art was important for two reasons: it was a reminder that art is for all and it created a platform to spread his message.

Despite the artist’s desire to democratize his art for ordinary people, the market quickly appropriated his image to drastically increase its value. The Keith Haring Foundation, established by the artist during his lifetime, however, continues his artistic and philanthropic legacy by preserving his creations and supporting children in need and people living with AIDS.

Keith Haring passed away on February 16th, 1990. 30 years later, still exhibited all around the world and more popular than ever, the life and legacy of Keith Haring live on. 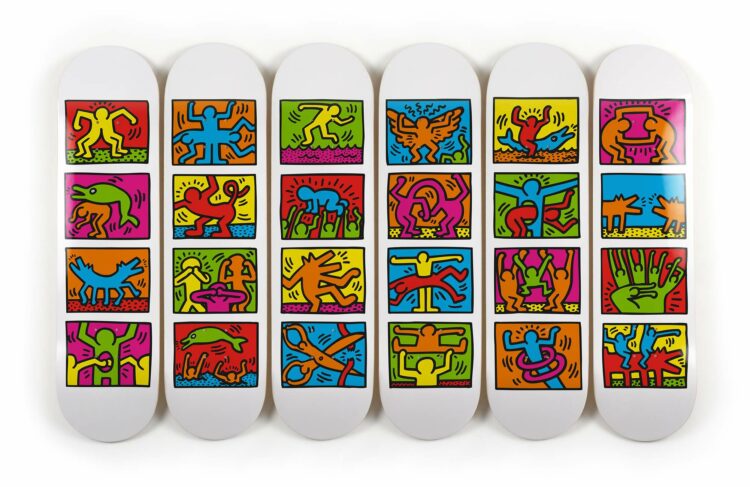 Discover the full collection of our collaboration with the The Keith Haring Foundation.

Does the world really need another podcast?